Hey. Let me tell you a secret. Quiet people piss me off.

Susie is a deuteragonist of Deltarune and the monster Hero of Light that The Prophecy speaks of.

Susie has the appearance of a tall, purple, vaguely reptilian monster with freckles at the sides of her face and yellow teeth. In Hometown, Susie has messy aubergine hair that hangs over her eyes, a long purple jacket, a white shirt with blue trims, a pair of torn jeans and a pair of black shoes.

In the Dark World, her hair is plum, her skin turns lavender pink, and her clothes are replaced with: a long black vest with purple trims, a sleeveless purple shirt, baggy plum pants, and black boots with golden trims. She also has studded bracelets on her arms and a belt with a large golden buckle in the shape of a heart.

After defeating King, she pulls her hair out of her eyes, which are revealed to be yellow.

Despite her reptilian looks, Susie doesn't have a tail. When equipping the Jevilstail to Susie, she mentions she "Figured [she'd] grow one someday."

At school, before entering the Dark World, Susie appears as a bully. She acts very rude and aggressive toward other students, insulting them and even threatening them with physical violence, such as "eating [one's] face." She does not have any friends and appears to be convinced that everyone hates her. Susie may, however, use this as an excuse to act rudely. When she enters the Dark World, Susie beats up every enemy she meets and is uninterested in being a Hero of Light, even saying to Ralsei that the end of the world is "none of [her] business" and that it "might be kind of fun."

When Lancer compliments her on her villain performance, she becomes excited about finally meeting someone who appreciates her as a "bad guy." After joining Lancer's side and forging a friendship with him, she starts to have fun and be more caring to him. To avoid killing King and hurting Lancer's feelings, Susie changes her ways and obeys Kris's orders, though somewhat reluctantly at times.

Being an ax wielder and having the most health, Susie takes the role of the party's tank. At the beginning of Chapter 1, she prefers solving conflicts with violence, and always attacks the enemy on top. Early on, Kris and Ralsei can ACT and warn enemies of Susie's attack, making her miss. Susie can also be put to sleep using Ralsei's lullaby, though she wakes up if she takes damage.

Susie frequently makes fun of Ralsei, and eventually joins Lancer and turns against Kris and Ralsei. She does not seem much nicer at the point of rejoining the party, although she assures Lancer that this does not mean they are no longer friends after he shows doubts.

Lancer later betrays the party, which angers Susie. However, after getting into a fight with a reluctant Lancer, she misses on purpose, and promises to resolve the encounter with King peacefully after facing the possibility of upsetting Lancer by hurting King. She joins the party for real, promising to cooperate and is willing to ACT if Kris tells her what to do. She also threatens King when he threatens to throw Lancer off the castle, allowing Lancer to break free of his grip. She then strikes King with her ax when he threatens Kris after the latter uses their shield to block one of King's attacks intended for her.

Once Susie and Kris are about to head back to the Light World after defeating King peacefully, Kris has two choices on what to do. If they head towards the fountain, Susie pleads with them to at least say goodbye to Ralsei and all the Darkners first, indicating she misses their company. If they don't accept, Susie stops them from leaving anyway by telling them that they're lying and that they should at least say goodbye to Lancer first. Alternatively, if they immediately head back to the left instead, Susie expresses surprise, but is happy nonetheless and willing to say goodbye to the Darkners. Once Susie and Kris leave the Dark World, she suggests that they both go back the next day.

All of Susie's "Buster spells" can have their damage increased by pressing and holding "Z" or "A" on a controller once the animation starts.[1] This increases attack damage by 30, but mashing will not increase damage further.

Requires 50% TP, 40% TP whilst having Devilsknife equipped. An attack that does moderately more damage than the standard Fight action. Deals "Rude Damage". Outshone by Red Buster during the King fight. "Deals moderate Rude-elemental damage to one foe. Depends on Attack and Magic."

Requires 60% TP. An attack that does significantly more damage than the standard Fight action. Only available as an ACT command during the King fight. Depends on Attack and Magic, instead of dealing "Rude Damage" like its dwindled type, it deals "Red Damage". "Your SOUL shined its power on Susie!"

To win the battle violently, the party can attack Lancer until he runs out of HP. If Susie is out of HP she will be down for three turns, but then revive at full HP.

To win the battle peacefully, the party can perform X-Anything on Lancer successfully 4 times, convincing him not to fight. However, on the 4th time, Susie blocks Lancer's ears, negating the X-Anything ACT. Susie continues this unless she is put to sleep through Ralsei's Sing.

Even though Susie can be put to sleep, she cannot be pacified due to Lancer's bike absorbing the Pacify Spell. She wakes up on her own after three turns.

At the beginning of chapter 1, Kris and Susie know very little about each other, with Susie being initially hostile towards Kris. Once Susie joins Lancer, however, Ralsei seems to be her primary target for teasing. As the chapter progresses, she slowly opens up to them after re-joining the party, and once faced with the possibility of hurting King and upsetting Lancer, she decides to listen to Kris's commands. After this, she seems to be very loyal to Kris and respectful of their position as leader, attacking King when he threatens Kris's life.

Ralsei's optimism and pacifism are in stark contrast to Susie's initial violent behavior, causing a lot of conflict between the two characters. Although Ralsei becomes the new target of Susie's teasing once she joins Lancer, she opens up to him as she does to Kris, and the two eventually get along much better.

While initially viewing Lancer as little more than an annoyance, once Lancer expresses his admiration for Susie, she decides to join him and abandons Kris and Ralsei. The two are shown to be very close afterwards, with Susie looking out for his wellbeing, such as when he gets lost in the Forest maze. Even after Lancer betrays her trust, she is unable to bring herself to hurt him, and reassures him that he is still her friend, despite the circumstances.

With eyes showing (after King battle) 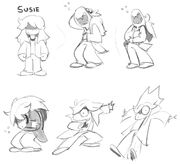