These birds are Pissing me off... I'm the original      Starwalker

Starwalker is a hidden NPC who can first be encountered in the Forest. In Chapter 2, Starwalker can also become a Key Item.

Starwalker has the appearance of a yellow five-pointed star with eyes, but the two lower points are replaced by legs. Their eyes generally appear grumpy. They have no arms.

Starwalker somewhat resembles the beak of a Starwalker Bird and the SAVE Points from Undertale.

Starwalker likes to stress that they are the original Starwalker. Starwalker's dialogue often includes a very large gap between words, often emphasizes words in yellow, and capitalizes random words.

In Chapter 1, in the area with the Starwalker Bird, if the party backtracks after ringing the bell, Starwalker is found on the other side of the path (this can be done from either direction). If spoken to, Starwalker states that the birds are "pissing [them] off", declaring that they are the original Starwalker.

If Starwalker is interacted with in the Forest, they appear again in the prison of Card Castle, again stating that the prison is "pissing [them] off", and that they are the original Starwalker.

Appears in the key items menu

The original
(Starwalker)
Starwalker only appears in Chapter 2 if the party interacted with Starwalker in the Forest in Chapter 1.

When Lancer and Rouxls Kaard enter the inventory as Key Items, Starwalker also joins. Starwalker does not have an equivalent Light World item, and is not mentioned in the description of the Cards Light World item that represents the Lancer and Rouxls Kaard Key Items. While in the party's Key Items, Starwalker's sprite appears in the top left of the item descriptions in the Key Items menu while Lancer is also present. Once Lancer leaves Kris's pocket, Starwalker's sprite no longer appears until Lancer returns later on. The Starwalker Key Item cannot be used.

In Cyber City, when Kris and Noelle reunite with Susie and Ralsei at the bowling pin games, if Starwalker is in the party's Key Items, Starwalker also follows for that room only.

When assembling the Thrash Machine to fight the GIGA Queen, Starwalker appears as one of the characters who are combining their power and simply says "Star Walker", just before Rouxls Kaard adds the original Thrash Machine. If present, they add 5 HP to the Thrash Machine's maximum HP, capped at 250. 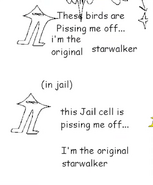