He wants to make a DEAL, but don't give him your MONEY!

All ware prices rerandomize every half-second.

Spamton, full name Spamton G. Spamton, is a robotic Darkner and antagonist in Chapter 2 of Deltarune. He is initially encountered in Cyber City, where he is fought as a miniboss.

After his battle, he appears as a shopkeeper in the Trash Zone. His shop is unusual in that his items are not what they appear, and their prices fluctuate rapidly while looking at them. He is also the only shopkeeper that the party cannot sell items to, with the "SELL" option being replaced with "BUYMORE!!" His wares are:

Spamton NEO is his upgraded form, which serves as a bonus boss on a normal route and the final boss of the Chapter 2 Snowgrave Route. He holds one of the Shadow Crystals.

Spamton appears as a diminutive robotic ventriloquist's dummy that wears yellow and pink glasses that sometimes change colors and a long-sleeved black V-neck shirt, with black hair that is slicked back, appearing similar to a pompadour.

After becoming Spamton NEO, Spamton assumes the form of the machine he inhabits. The body of this form looks like a disheveled Mettaton NEO with a gaudy pink and yellow color scheme, and a laser cannon mounted onto his hand. Countless green wires suspend him in the air.

Swatch mentions that many people have failed to imitate their look, and some people have even gone so far as to impersonate them. Spamton's slick black hair, multi-colored glasses, pointy white face and black suit are noticeably similar to Swatch's outfit.

Spamton's design seems to be based on a number of popular depictions of puppets, having the face and style of dress seen on classic ventriloquist dummies with the nose of Pinocchio. This is also hinted at in his Spamton NEO form when he refers to himself as a puppet, and with the song "A Real Boy!"

Spamton has the ability to increase the size of his head. In his NEO form, his head is constantly larger than usual.

Spamton was once a natural salesman, always willing to cut a deal. While he still bears a shadow of these traits, his deals are now often nonsensical or violent. He claims that he became a salesman not for the money, but for the freedom to make his own deals. However, he still attempts to scam Kris for money (which he refers to as "Kromer") at every opportunity. His speech patterns are similar to typical obfuscated spam email text, with many words replaced with non sequitur variants in square brackets that could imply incorrectly-applied mail merge variables or hyperlinks, or various voice glitches.

In much of his dialogue, he seems mentally confused and insane, seemingly projecting himself onto Kris, contradicting himself, and saying things which make little sense, without warning. This mental instability seems to clear up briefly after fighting him in his NEO form, as he wishes Kris success with their journey without using broken English.

Spamton consistently spells "generosity" as "genorisity," "guarantee" as "guaranttee," and "special" as "specil", with an exception for the latter at the end of the Spamton NEO battle after snapping all the wires.

Some time before Kris and Susie entered the Cyber World, Spamton existed as an unsuccessful spam email Addison, overlooked by Lightners and never able to catch a break.[1] Despite his lack of success, he always proclaimed to his fellow Addisons that he would be a "big shot" one day.[2]

Desperate, Spamton began to look for any way to become more popular. Eventually, he came into contact via phone with someone who could help him, and suddenly he began to be wildly successful. From that point on, Spamton was "on the phone all the time," being aided by an unknown person.[3] His fellow Addisons became jealous of him for his sudden success, and stopped going out with him.[4] His success landed him his own room at the Queen's Mansion, and he began to brag more and more about his deals, ranging from TV commercials to cars.[5]

Then, as sudden as his success was, it came crashing down. The stranger helping Spamton vanished, and all his sales went with them.[5] Desperate, Spamton started spending all of his time "praying" in the basement, obsessed with an "artifact,"[6] presumed to be the machine he uses to become NEO. The machine was created by an unknown Lightner with the help of Swatch, digitally visualizing their hopes and dreams. However, those dreams never came to be, and the machine was abandoned in the basement with the rest of the corrupted data.[7]

With nothing left, Spamton was to be evicted from the Queen's mansion. The day of his eviction, one of the Addisons went to visit Spamton, but found he had already left. Spamton had left his phone hanging off the handle. Spamton presumably left in the middle of a conversation, as the Addison could hear someone on the other end, but after putting the phone to their ear it only made "garbage noise."[8] Likewise, Kris's Cell Phone only makes garbage noise when used in the Dark World.

Abandoned by all of his friends, Spamton was reduced to living in a dumpster in a Cyber City alleyway.[9]

After asking him about friends, he brings up someone or something named Mike. Spamton seems to have a hatred for them, and tells Kris not to trust what they hear on TV, then calls Mike a criminal.[12] Spamton also exclaims "ARE YOU GETTING ALL THIS [Mike]!?" at the end of his NEO fight if he is defeated violently, implying Mike may have recorded for Spamton in some capacity in the past.[13]

Spamton is first encountered by Kris in Cyber City, where Kris seemingly disturbs the garbage container in which Spamton is residing. After a short interaction, Spamton engages Kris in combat as he continues attempting to convince them to accept his "deal."

Later, if Spamton was defeated through mercy, he can be seen again in a shop to the left of the Trash Zone. After Kris accepts yet another deal, he tasks Kris with bringing him an EmptyDisk located in a basement in the Queen's Mansion. After purchasing a KeyGen from Spamton, Kris can retrieve the EmptyDisk from the machine in the dilapidated basement. Upon returning to Spamton's shop, Spamton proposes his final deal to Kris: transmitting Spamton through the EmptyDisk and returning it to the machine in the basement.

After Kris places the LoadedDisk back into the machine, Spamton transforms into Spamton NEO, but is horrified to see that his new form is held up by literal puppet strings. He attacks Kris in an attempt to obtain their SOUL, believing that it is the key to earning his "freedom." Before he can, however, Kris's party intervenes, leading Spamton NEO to battle the party for all of their SOULs.

Spamton NEO can be defeated either by fighting or by cutting the wires controlling him. If he is defeated by fighting, he attempts to continue the fight by turning into "Spamton EX," but his gravely damaged body explodes as he attempts to transform. If the party cuts all of his wires until one remains, Spamton NEO realizes that Kris is trying to free him in spite of his efforts to kill them. He dances gleefully and thanks them, asking them to cut the last wire, only for him to helplessly fall to the ground without any strings to hold him up.

No matter the method, once he is defeated, Spamton returns to his normal form and becomes calm and lucid. He laments how he could not become anything more than a puppet, but compliments the party's strength and wishes them well. He then offers himself to the party, transforming into either a Dealmaker (when defeated by cutting his wires) or a Puppet Scarf (when defeated by fighting). Kris also receives a Shadow Crystal.

In the Snowgrave Route, after all enemies in the area have been frozen by Noelle, Spamton sells Kris the Thorn Ring from a dumpster, presumably where he lives. He tells the party how many enemies are left before he sells the Thorn Ring, which must be bought for 1997 Kromer in order to proceed on the route. He then takes advantage of the fleeing enemies to take over Queen's Mansion, which he fills with Pipis. At the top of the Mansion, after bypassing Queen, Kris fights Spamton NEO as the final boss of the route, Spamton explaining that sealing the fountain would ruin his rise to glory. Towards the end of the battle, Spamton massively boosts his defense, forcing Kris and the player to call their allies for help. Kris calls Ralsei and Susie for help twice each, but they do not respond. The player then calls Noelle, who responds and freezes Spamton. As in the normal route, a Puppet Scarf is added to the inventory for beating him this route.

Before all enemies are frozen

After all enemies are frozen

After buying the Thorn Ring

After defeating him (Spared)

After defeating him (Health depleted)

If the Snowgrave Route was aborted after acquiring the Thorn Ring, the last three lines change to

To spare Spamton, one has to engage in his deals without giving him money. The correct options are:

The Minitons attack can be evaded by moving left and right in the middle of the Bullet Board.

Spamton NEO introduces the yellow SOUL mechanic. Similar to the yellow SOUL Mode in Undertale, this allows the SOUL to shoot bullets at certain obstacles. The SOUL can also charge the bullets for a "big shot."

If aiming to defeat Spamton NEO through ACTing, it should be noted that the following actions increase his mercy:

If using ACT, getting as many "Snap All" commands as possible is helpful as it consistently contributes 7% to the Mercy bar. However, it is not necessarily the most labor-saving strategy, especially if all three characters suffer damage. It is helpful to have Kris and Susie focus on snapping Spamton's strings while Ralsei is used for healing. If extra TP is needed, Susie or Kris can defend instead.

Both Susie and Ralsei gain a unique ACT in this fight: Susie's Supercharge decreases the time it takes to charge a big shot (and increases the shot's speed), and Ralsei's FluffyGuard summons two tiny Ralsei shields that orbit the SOUL. Pressing X or SHIFT (with default controls) stops the tiny Ralseis from orbiting.

If played using a keyboard, since both Z (assuming default keybindings) and Enter can be used for firing shots, holding one key while pressing and releasing the other key allows continuous firing of Big Shots without charging, which would significantly reduce the difficulty of the fight.

However, starting in v1.06, using this exploit causes Spamton NEO to become "angry," his face fuming and turning red. While angry, damage done by Spamton NEO's attacks is greatly increased. The damage increase from this scales lower each time the player gets a Game Over. In v1.05, in preparation for this feature, the game started tracking how many times the exploit was used using a variable named "funnycheat."[14] If this exploit is used during the introduction of the yellow SOUL, the rage mechanic is reset as soon as the actual battle begins. As of v1.07, alongside increasing damage, the properties of certain attacks are altered when Spamton NEO is enraged, and any health-based attacks (such as Chained Heart) have higher health than usual.[15]

In the Snowgrave Route, after Spamton NEO's defense raises, fighting him cannot lower his HP under 6% and Kris must ACT to end the battle.

After defeating him (Spared)

After defeating him (Health depleted)

Talking about "OUR DEAL" after buying KeyGen.

Spamton with a sinister expression.

Spamton, as seen from the backside.

Spamton wrapped in vines after sparing his NEO form. 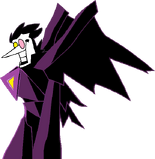 Spamton NEO's giant form, as seen during his special attack.

A miniature Spamton with angel-like characteristics. Provides healing if the F1 key is pressed during any Spamton fight.