I Just Want To Make Everyone Smile
And If I Become An Evil Villain To Accomplish That
Is That Bad?

Queen, full name Serial Number Q5U4EX7YY2E9N, is the primary antagonist and final boss of Chapter 2 in Deltarune. She is the ruler of the Cyber World, a Dark World located in the library's computer lab.

GIGA Queen is her giant robot that serves as the Chapter 2 final boss on a normal route.

Queen is a tall and slim black, azure, and white Darkner. She wears a sleeveless black top with an azure masonic collar that has slightly spiked shoulders and a large white medici-styled collar, white pants, black high-heeled calf-length boots, azure gloves, a beauty spot at the right of her eyes, azure lipstick, and an azure cap with black marks on each side that sweeps significantly behind her head. Her eyes are a dark screen with a heart-like shape with eyelashes , occasionally showing red text according to her emotions. Her overall design bears a resemblance to Lancer and King (the white/blue color, eyes that are replaced with a dark shape, dark colored torso, white legs/pants, blue gloves, boot-like shoes), despite her being a computer rather than a playing card like they are.

GIGA Queen has white skin like Queen, along with a black heart-shaped screen as eyes, while having a jordy-blue star-like cap, and matching lipstick. She wears azure shoulder pads, a sleeveless jordy-blue leotard with a thin black belt around it that has a azure diamond-shaped crystal-like object in the middle of her, shorter azure gloves, and azure high-heeled pumps. When doing her acid attack, GIGA Queen's star cap and leotard turn to the same green color as her acid.

Queen is a benevolent, if somewhat airheaded, person. While she is the main antagonist, it is mostly out of lack of insight rather than malice. She seems reluctant about controlling people she likes, and would rather they willingly go along with her plans to make them happy. She is also prone to giving people pet names and describing them using fun adjectives. She genuinely believes she is doing the right thing by opening Dark Fountains, and after she learns the truth of The Roaring from Ralsei, she recognizes that she was misguided and immediately stops her plan.

Being a computer, she has a unique speech pattern evident by her capitalizing first letters of every word in her dialogue, which can either denote a robotic monotone or her over-enunciating every word as if it were its own sentence. She also neglects the use of punctuation marks or puts them in rather weird places, for computer-y effects like imitating a text template (e.g. You Have Been: [text]). She also uses Internet acronyms when talking, such as LMAO. She often laughs in a distinguished manner.

Despite her questionable actions and her naive personality, Queen does seem to care for the party, including Berdly. It is shown that, despite finding the latter annoying, she tries to warn him about his arm being damaged before he takes his plug out of his face. She also tries to appeal to them by giving them rooms with things based off their history search. In the end of a normal route, she gives Noelle the option to ignore her desire to create a new fountain and lets her choose herself.

Not much is known about Queen or her past, except for the fact that she and her kingdom seem to take power from Lightners going on their devices and using the internet. She makes references to a past relationship with King, however, it's unknown how intimate they were. Queen is not flesh and blood, as she states multiple times that she is a computer, and there is no indication that she knew Lancer prior to meeting him in Ralsei's Castle Town.

At some point in the past, Queen overtook Spamton as the Cyber World's most popular figure, with advertisements of his becoming overlaid with her own ads.

After losing access to the Internet, she became somewhat insane, brainwashing her Plugboy subjects and doing other considerably heinous things. At some point, Queen was able to obtain a video of a Dark Fountain being formed.

After the Knight creates a Dark Fountain in the Library's computer room, Queen takes control of the Cyber World. When Berdly and Noelle enter the Cyber World, Queen abducts Noelle and reluctantly accepts Berdly as a minion. She wants to make Noelle her "willing peon" and roboticize her face. Queen tries to get Noelle to fight the Lightners, but Noelle only talks to Susie, so she brings in Berdly to fight them.

After defeating Berdly, Kris meets Noelle who has escaped from Queen, and who Queen is looking for. Queen decides to form a truce with Kris until she finds Noelle. Later on, it becomes increasingly evident that Queen genuinely cares for Noelle.

Eventually, the Lightners, including Noelle and Berdly, reach the Queen's Mansion, where the Queen declares the end of her truce and imprisons everyone but Ralsei, who briefly becomes a butler due to her running out of cages. Berdly joins forces with Kris and the others to take down Queen and save Noelle. However, Queen captures Berdly again and uses a wire to control him. After a battle with Queen and the controlled Berdly, Queen once again escapes and delivers a monologue about the Knight and wanting to use the power of the Lightners to expand the Cyber World with more Dark Fountains. Susie strikes her down, but Queen retreats to her giant robot.

After a giant robot fight, Noelle tells Queen that she will never be happy if Queen is controlling her. Ralsei also tells everyone including Queen that opening more Dark Fountains will bring the Roaring, an event that will destroy all Darkners and bring chaos to the world. Queen realizes the error of her ways and ends hostilities with the Lightners. She then goes to Castle Town with the rest of the recruited Darkners.

A cutscene in Castle Town reveals she has some history with King, and she quickly becomes friends with Lancer. She also states that she is taking in Lancer as her new son in a cutscene with King.

During her first encounter, Queen uses Berdly hypnotized by a Werewire cable to attack the party for her. The battle ends when Berdly is fully loosened from the cable or Queen's (chair's) health is depleted. If aiming to defeat Queen through ACTing, it should be noted that the following actions increase Berdly's mercy when Queen is Defenseless:

Additionally, both Red Buster and Dual Heal will be available during the fight.

When the cable is around 25%, 50%, or 75% loosened or Queen's health is around 75%, 50%, or 25%, Queen puts up a firewall powered by her chalice of battery acid, protecting her and preventing the party from taking the previously described actions. At this point, the party must deplete her shield power, either by toasting her to trick her into drinking the battery acid or by inflicting damage on it directly, thus making Rude Buster and Red Buster powerful options. Afterward, the battle can continue as normal. To be specific, the mechanics of the acid shields are as follows:

Regardless of how the player defeated Queen, the following dialogue then takes place:

Quotes regarding keyboard controls substitute the actual controls if they have been rebound.

Flavor text regarding keyboard controls substitutes the actual controls if they have been rebound.

After returning to Castle Town at the end of Chapter 2 (if all Darkners from Cyber World are recruited), an interaction between King and Queen occurs in front of the basement jail cell, where Queen calls King "Kingy Wingy" and King calls Queen "Queenie Beanie." These pet names further reinforce possible past relations.

If all Darkners from Cyber World are recruited, Queen declares herself as Lancer's mother after the events of Chapter 2. However, given her quip that she arbitrarily came to the decision to take care of him whilst talking to King, it is unknown whether the two are biologically related. They can be seen hanging out on lawn chairs right outside the rooms that Ralsei made for his friends. Lancer refers to Queen as "girldad" to which Ralsei asks if he means "a mom." Queen and Lancer both share a laugh, calling Ralsei "Peachboy." Strangely, Lancer refers to Queen as a "wild Mom" after being released from Kris's pocket in Queen's Mansion, making their exact relationship inconsistent.

Kris is possibly the only party member Queen takes a genuine liking to when they first meet. When they're on their own for the first time, Queen brings up Kris not having opinions and screaming at all and is unable to comprehend why others are not more like them. She also makes a truce with Kris so that they can find their respective allies while entrusting Kris to not tell Berdly where she's hiding whenever he appears alone. Twice in the game, Queen prompts Kris to grab a banana in the path for the potassium.

Queen doesn't acknowledge Ralsei until after she captures Kris, Susie, and Berdly. Since she doesn't know how to capture Ralsei, she decides to make him a butler for her mansion, which Ralsei agrees to. She also seems to be prone to forgetting Ralsei's presence as she forgot about Ralsei while capturing the others and could not even remember if there was a third party member when attempting to bribe the party during the final fight.

Queen's main goal is to find Noelle so that she can use her will to aid her in world dominance. Naturally terrified by this, Noelle tries to hide from her most of the time. However, when Queen doesn't know Noelle is around, she expresses genuine concern for her well-being since she could be lost alone in the city. Even after capturing Noelle and being defeated, she still doesn't force her and gives her the choice to make a better world, not wanting to see Noelle sad.

Berdly becomes Queen's minion without her consent, wanting to create a world for himself and Noelle. Queen barely puts up with him, mistaking his name to be "Burghley" (or forgetting altogether) and frequently ditching him because she finds him annoying. In the battle with Queen and the mind-controlled Berdly, she reveals that she only intended to use the face plug on him.

If Jevil is fought instead of pacified in Chapter 1, he mentions the "Queen" will return. It is likely he is referring to Queen herself, and that he has met the Queen in person, as Tasque Manager appears to have a personal dislike of Jevil. 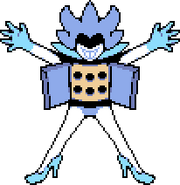 A version of Leonardo Da Vinci's Mona Lisa with Queen's face. Multiple of these paintings can be seen along the walls of her mansion.