ADBLOCK
Poppup is an enemy encountered in Cyber City. They act similar to pop-up advertisements, hence their name, popping out of seemingly uninhabited places and then becoming more powerful as the player pays attention to them.

Poppups appear as a dolphin-like Darkner, featuring a large square on top of their head, a crossed-out circle on their forehead, and colorful, springy legs, presumably used in the process of popping up. They also seem to have some avian features, with some flavor text mentioning that they preen themselves and their only harmful attack featuring birds. They have large eyes, many teeth, and are light blue with a white underside. When spareable, their light blue skin instead turns light pink, and the crossed-out circle on their head becomes a smiling face.

Poppup seems to be starved for attention, hoping for somebody to click on it. This could, however, be simply a ruse to lure in victims, as advertisements like this are prone to use. Clicking on it has the effect of creating another Poppup, referencing real-life pop-ups.

If recruited, Poppup contributes to the Thrash Machine during the GIGA Queen battle.

A Poppup uses one of the following attacks per turn. When encountered in groups, the attacks may be stacked on top of each other: 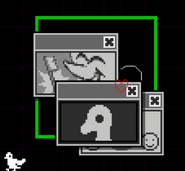