Kris is the main protagonist of Deltarune and, presumably, the human Hero of Light. They are controlled by the player for the majority of the game, with the exception of the ending cutscenes and brief moments in other cutscenes.

Kris initially appears with messy dark maroon hair and a golden-yellow skin tone. They wear a long-sleeved lime shirt with a single horizontal yellow stripe, and nondescript pants and shoes. One of Kris's distinct features is that the upper half of their face is overshadowed, which blocks visibility of their eyes.

When Kris and Susie fall into the mysterious Dark World, Kris's sprite changes. They are dressed in silver armor over a blue bodysuit, and wear a short, torn pink cape. Their skin turns cyan and their hair turns blue, which is most likely to reflect the lighting (or lack thereof) underground, in keeping with the visual and story themes of light and dark. Their entire sprite uses the same blue color for all shading, which gives the illusion that their cape has blue stripes in a few of their sprites.

Kris bears a notable resemblance to an unused human sprite from Undertale, albeit this is only due to the shadowed face, the identical hair color and the similar shirt coloring. Kris's color scheme is nearly the same as Frisk's, having the exact same skin and hair colors, but with different outfits as well as Kris's shadowed face. Kris also bears a minor resemblance to Chara, with their nondescript pants and shoes, and similar shirt colors. Although, that may just be due to the both of them sharing clothes with Asriel, as their shirts are not actually the same, just similar (Chara's shirt is green, Kris's is lime, the yellow stripe is different colors for each of them, and Chara's shirt does not have stripes on their sleeves.)

Kris shares several properties with the human children from Undertale, including a similar name to Frisk, and similar clothing to Chara. Like Chara, Kris enjoys chocolate, and takes chocolate kisses from Toriel's room without permission. They also enjoy drinking hot chocolate at QC's Diner.

The other characters have mixed opinions of Kris. Some call them a "creepy kid," others see them as nice. In the Dark World, the others see Kris as a "leader." Ralsei and, eventually, Susie follow their commands in battle and follow them around the overworld. Susie and King refer to them as a "quiet person." Their side of their shared bedroom is strikingly bare, including the shelves that the books now in Toriel's classroom must have previously occupied. They have a history of not waking up on time. When they were younger, Asriel sometimes carried them to school.

According to many of their neighbors, Kris has always been mischievous, pulling dark pranks such as covering themselves in ketchup and claiming it was blood. For example, Kris has the option to keep flushing the toilet before or after going to school, with Toriel replying: "You did not put a bath bomb in the toilet again, did you?" However, her view of the pranks seems to be as a minor annoyance, or even endearing, considering the fact Toriel sounded like she was at most a bit annoyed with the behavior. Townsfolk also appear to be surprised to find Kris voluntarily engaging them in conversation. If enough characters are talked to before returning home, several characters remark that Kris looks sick, strange, or pale.

Kris's behavior in the Weird Route, under the influence of the player, is heavily implied to be against their will. Noelle describes the voice she heard giving her orders as terrifying, noting Kris has been acting very strange lately. When Kris reunites with the party after defeating Berdly, Susie and Ralsei immediately notice Kris appears distraught.

Kris is first encountered when they are awoken by Toriel for school. At this point it is possible to go to School, or skip it by returning to bed. (Only after completing Chapter 1 once. Skipping school immediately dumps Kris into the Dark World.) If followed outside, Toriel drives Kris to school, leading to a short tour of Hometown.

Kris, being late to class, is told by Professor Alphys to pick a group partner. When Noelle Holiday is asked, she checks with Alphys about letting Kris join her group with Berdly, though Susie barges into the classroom, interrupting the proceedings. Kris then gets paired up with Susie. Afterward, Professor Alphys realizes there is no chalk for her to teach class with and sends Susie to go get some from the supply closet. She then asks Kris to go with her.

In the hallway, Kris witnesses Susie eating a piece of chalk. Once Susie realizes Kris is there, she approaches them menacingly, slams them against a locker, and threatens to eat their face. She then drops Kris on the ground, stating that Kris has a good mother and "It'd be a shame to make her bury her child."

Once at the supply closet, Susie opens the door, only to be perturbed by the eerie darkness emanating from the closet itself. When Kris and Susie enter the closet, they wander deeper and deeper looking for a light switch, only to find none, nor any walls for that matter. As they approach the door to leave, it slams shut. Papers beneath their feet begin to quiver and shake, and then fall into a void, with Kris and Susie following suit.

Kris awakens in a strange, unknown world, with their street clothes having been exchanged for armor and a cloak, and their skin now a bluish hue. After some exploration and sightings of a shadowy figure, Susie is found hiding in a pile of dust.

After a bit more walking, Kris and Susie are attacked by the mysterious figure, who is later revealed to be Lancer. After escaping, they come across Castle Town and encounter Ralsei. Lancer then interrupts Ralsei, accosts Kris and Susie and fights them for the first time. After the fight, Susie leaves on her own in an attempt to find her way out of the Dark World, leaving Kris and Ralsei on their own. Eventually, Kris and Ralsei catch up with Susie, who begrudgingly rejoins the party.

After numerous encounters with Lancer and getting mad at Ralsei for telling her not to fight, Susie decides to join Lancer instead for a while. This culminates in an encounter between Kris and Ralsei versus Susie and Lancer. At the conclusion of the fight, Susie once again rejoins the party, and Lancer tags along.

Eventually, Lancer grows uncomfortable with the situation and runs off towards Card Castle. Kris and the party attempt to follow him, but some of the King's soldiers capture them.

Ralsei and Kris wake up in a prison cell together, but the two quickly realize that Susie is being kept in an adjacent cell. Kris manages to guide Susie through a puzzle, unlocking her cell and allowing her to escape. After a confrontation with Lancer, Susie is able to release Kris and Ralsei from prison.

After making their way up Card Castle, Kris and the party face off against the King. After the fight, King deceives the party into believing he is willing to redeem himself, resulting in the party being cornered. Kris jumps in front of Susie to protect her, but is knocked back by another blow. King approaches Kris and, after taunting them, lifts them into the air, ready to kill them. Regardless of how the King was initially defeated, either Lancer and the King's subjects rescue the party, or Susie musters the strength to cast Pacify on the King, putting him to sleep. Which outcome occurs is based on whether or not the party harmed any of the denizens of the Dark World prior to facing the King (except for Jevil, Lancer himself and the first C. Round).

After saying goodbye to Ralsei, Kris is able to seal the Dark Fountain and return home, along with Susie. Kris can then choose to explore Hometown and speak to the inhabitants. Once Kris returns home and goes to bed, the adventure is over.

At some point in the middle of the night, Kris tosses and turns in bed, only to suddenly leap from their covers and jerkily make their way into the center of their room. As they stand on the carpet (emblazoned with the Delta Rune), Kris slowly raises their arm before violently tearing out their SOUL from their body and forcefully tossing it into a cage in the corner of the room. The SOUL can be moved in the cage, indicating that the player controls the SOUL, not Kris. Kris brandishes a knife that glistens in the light from the window before turning their head and smiling menacingly with their eye flashing red, similarly to the ending of a "soulless" Pacifist Route in Undertale. The game then cuts to black.

At the beginning of this chapter, Toriel rushes up to Kris's room, having noticed a knife in the pie, having been led to believe that Kris had decided to sneakily eat it whole while she was asleep. She laughs it off, though, suggesting she should lock the oven in the future, before they both set off to school once again.

At the end of Chapter 2, Kris opens a Dark Fountain using their Knife, presumably using their Determination and willpower as hinted at by the Queen. Whether this means that Kris is actually the Knight is unclear.

As a human, Kris cannot cast spells. Instead of casting spells, Kris uses the ACT command in different ways depending on the enemy being faced. ACTs usually cost 0 TP to perform, although there are a few specific instances where an ACT cannot be executed unless the party has a sufficient amount of TP. In the fight with King, Kris can act with Susie and Ralsei to create improved versions of their spells. "Do all sorts of things. It isn't magic."

The following are ACTs that cost TP and only Kris's turn:

Requires 25% TP. This ACT is only available during the fight against King, replacing Kris's Talk ACT after attempting to talk to the King. Kris encourages the party, raising all of their DEFENSE stats for one turn.

Requires 20% TP. This ACT is only available during the fight against Jevil. Causes Kris to perform a pirouette gesture, tiring the boss and causes a specific effect depending on what turn it is. The effects are as follows:

Kris's SOUL within the overworld

Kris's idle animation within a FIGHT

Kris sitting down or knocked out in battle

Kris's animation from the end of Chapter 1 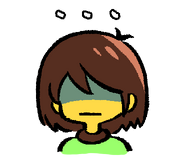