Hometown is a town featured in Deltarune. It is fully accessible at the end of Chapter 1 and serves as the final location visited in the chapter.

Within the town's school apparently lies a portal to the Dark World, in the form of a supply closet. It is unknown how to—or even who can—activate the portal in the manner that Kris and Susie do at the beginning of the game.

Hometown is surrounded by a deciduous forest whose bright coloration suggests that the season is fall. It can be divided roughly into east and west regions on either side of a street which, though not a straight line, runs perpendicularly through the whole town from Toriel's house to the Mysterious Door. There is a lake to the east of town. 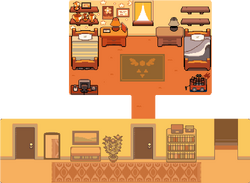 Map of the top floor of Toriel's House

Map of the bottom floor of Toriel's House

Toriel's House, the first and last location visited in Chapter 1, is the home of Kris, Toriel, and formerly Asriel. It is the northernmost location in the town. A tidy two-story home, it is surrounded by trees on three sides and has a driveway heading south, where Toriel's red van parks when she is home. A symbol similar to the Delta Rune, with the triangles reversed, appears above the front door.

The front door opens into the Living Room, a wide-open space with an unplugged TV, a book of hymns on a side table, and Chairiel, Toriel's living-room chair. A landline house phone hangs on the wall between the Living Room and adjoining Kitchen, which features a trash can emitting a floral scent, human- and monster-shaped cookie cutters, a stovetop not quite as clean as the one Toriel uses in Undertale, white fur in the sink drain, and a picture of Toriel, Kris, and Asriel on the fridge.

West of the Kitchen, a stairway leads to the second floor, while a door leads to the Restroom, which is stocked with body spray under the sink, two different shampoos in the shower, and a toilet in which Kris once placed a bath bomb.

Upstairs, a Hallway contains a bookcase with several books on snails and one history book by Gerson Boom. Some crayons can be observed in a small table drawer, and a mirror reflects whoever passes it. The locked westernmost door in the hall is presumably Toriel's room, while a stairway to the east leads back down. A cactus stands beside a centrally-placed door leading to the Bedroom.

The east side of the Bedroom contains Kris's belongings, while the western side was used by Asriel before he left for university. Between them, a carpet featuring the Delta Rune decorates the floor and a window in the north wall looks out on a beautiful day. On Asriel's side, books are boxed under the computer desk, music CDs and a game console are under the bed, and the drawer's contents change depending on which SAVE file is being used. Trophies line the walls above Asriel's bed, and star-shaped decorations glow in the dark. By contrast, Kris's shelves and walls are bare, their drawer contains only clothes, and the only visible personal belongings are a rusted birdcage in a battered red wagon. At the foot of the bed, a dark stain marks the floor.

If Kris returns to bed and goes back to sleep before exiting Toriel's house, their morning at school is skipped and they wake up in the Dark World. Going to sleep after returning from the Dark World ends Chapter 1.

Catty's house, home of Catty, Catti, and Dad Cat, is east of the main road, south of Toriel's house, and west of Bratty's house. It cannot be entered in Chapter 1, though cat-related interior decorating can be seen from outside and Catty says their "cat flap is always open" to Kris. An outdoor grill at the side of the house smells of Dad Cat's grilled cat food. Catty and Dad Cat can be found outside the house after school.

Bratty lives to the east of Catty's house and west of the Ghost House. Eyes can be seen through the windows and scuffling noises sound from within. It cannot be entered in Chapter 1, but Bratty can be found outside the house after school.

The Ghost House, a tilted blue-grey structure whose exterior resembles Napstablook's house from Undertale, is east of Bratty's house and west of Flower King. The house cannot be entered in Chapter 1, and, unlike in Undertale, does not have a pink counterpart beside it. Kris can knock at the door after school; one of the house's two inhabitants is home, but does not let them in.

Flower King, a flower shop owned by Asgore Dreemurr, is located east of the Ghost House and west of the lake path. The eastward road ends in front of the shop and Asgore's truck can be found parked beside it. The shop can be explored in Chapter 1 after school.

A dirt path leads eastward from Flower King, past two green metal picnic tables to a lake on the east side of town. After school in Chapter 1, the Royal Guards are taking in the fall air near the picnic tables and Onion can be spoken to if Kris stands on a brown circular spot next to the lake.

The Holiday residence, home of Noelle Holiday, Rudolph Holiday and his wife, is inaccessible to the west of the main street, behind a large locked gate to which Noelle's mother has the key. While the residence cannot be seen or visited in Chapter 1, Noelle can be found standing at the gate after school if Kris visits Rudy at the Hospital first.

The Grocery Store is east of the central road and west of Sans and Papyrus's house, and is currently run by Sans. It cannot be entered in Chapter 1, but Sans stands outside after school. The exterior resembles Undertale's Grillby's, but with "GRILLBY" crossed out and the final apostrophe and S remaining to start the badly scribbled name "'Sans".

Sans and Papyrus have recently moved into the house east of the Grocery Store and west of the apartment buildings. While its exterior returns from Undertale, it no longer has a pirate flag or holiday decorations. The house cannot be entered in Chapter 1 and only "the distant trousle of bones" can be heard within.

Two of the town's three brownstone apartment buildings sit side by side to the east of Sans and Papyrus's house, with the Alley running up their east side. Shopkeeper's Child peers out of a window in the first one, while a connoisseur of knocks refuses to answer the door in the second.

The Alley lies between Bunny Apartments and Snowdrake Apartments. Alphys keeps office hours there after school.

The third of the town's four brownstone apartment buildings sits to the east of the Alley. Monster Kid and Snowdrake stand outside it, while Snowdrake's father is heard from within.

The Diner is on a street corner to the left of Ice-E's P"e"zza. It can be visited after school. Boasting a homey atmosphere, it contains three booths and a cafe counter with bar stools. Catti and Waitress Lion are servers. Diner Shopkeeper, who works behind the counter and remembers Kris coming in on Sundays, gives them a Hot Chocolate.

Ice-E's P"e"zza is a pizza place to the west of QC's Diner. Burgerpants, Blue Ears, The Warrior, and possibly Purple Guy work there. The building cannot be entered, as its employees are outside wearing Ice-E costumes and shouting slogans.

The Librarby, whose misspelled sign returns from Undertale, is east of the central road and west of the School. It can be entered in Chapter 1 after school and has a different interior layout than Undertale's Librarby. Berdly works there after school, and patrons include Temmie, Jockington, and a striped bird who loves books and, blocking the stairs to the second floor, advises Kris to read the books upstairs. Kris can lick one of the books on the shelves; others include someone's diary and a bestseller by Gerson Boom. In the Teenz Corner display, an "anonymous yellow lizard" has left a positive review of Mew Mew Kissy Cutie 2. Inside a locked door to a computer lab, a white dog is working at a computer, making a game and sometimes playing the maracas.

The School, east of the Librarby, seems to cater to the education of all the inhabitants of Hometown. It is split into two classes: one for younger children, taught by Toriel, and one for adolescents, taught by Alphys. Toriel brings Kris there for the school day after they exit her house.

After returning from the Dark World, Kris and Susie find themselves in an unused classroom. It is littered with playing cards, toys, and games, the arrangement of which, starting from a locked door on the left, roughly corresponds with the path of the party's adventure within the Dark World. In the back of the classroom sits a stuffed animal that closely resembles Seam in appearance. The unused classroom is in the northeast corner of the school, and another locked room is down the hall in the northwest corner.

The Hospital, west of the central road and east of the Police Station, can be entered in Chapter 1 after school. Inside, Red Big Mouth works as the receptionist. Kris can visit two patients, The Warrior and Rudy Holiday, in rooms beyond the reception area.

The Police Station is west of the Hospital. It cannot be entered in Chapter 1. Inside, someone closes the blinds if the door is knocked on.

West of the police station, the road continues but is blocked with sawhorses and police caution tape with "NGAHHHHH!!!" written on it.

The Town Hall is east of the central road. Inside a reception area, Politics Bear and an unnamed character can be found after school. Hand Receptionist, who works behind the desk, does not allow Kris to see the mayor, whose offices are somewhere in the building. The reception area is decorated with a pine tree and a map of the town.

The House of Worship is at the end of the central road, slightly southwest of Town Hall. It cannot be entered in Chapter 1, but Father Alvin can be found standing in front of the building after school. A dirt path leads further west to the Cemetery, while a grassy path leads further south to the Mysterious Door.

The cemetery in Hometown, west of the House of Worship, accommodates a Gerson memorial bench, as well as four graves; one for Gerson, the other three bearing the names of the monsters which were turned into Amalgamates in Undertale.

A path to the south of the House of Worship and Town Hall leads into the forest and ends in a dell containing a mound of grassy, overgrown earth with a large double door facing south. The door is locked, and appears rusty and crusted with clinging vines. The door is labeled as a shelter in internal game files. Below the doors, mus_smile at 0.15 pitch can be heard.[1] This is the southernmost location on the Hometown map. The music in the background is completely muted and no sound can be heard.