A castle...?
Why the hell is there a castle inside a supply closet...?

Castle Town is a town in the Closet Dark World. It houses Ralsei's castle, which in turn houses the Fountain of Darkness. It is unique in its ability to host Darkners from other Dark Worlds.

Initially, there are no inhabitants present apart from Ralsei. At the start of Chapter 2, Kris brings all of the residents of Card Kingdom to Castle Town, populating the town and changing its name and theme to My Castle Town.

In Chapter 2, the Rudinn in front of Party Dojo refers to Castle Town as "[player]Town." "[player]" is the player's name, as provided during the Introduction or upon starting Chapter 2 (if not continuing from Chapter 1).

Kris and Susie first enter Castle Town after they slide down a cliff in ??????, escaping Lancer's attacks. The two heroes enter the town, only to find it deserted, and continue into the castle.

In the castle, they meet a hooded Ralsei, who tells the party of The Prophecy and that the two of them are the Heroes of Light/Delta Warriors mentioned in the prophecy. After hearing the tale, Susie explains that she has no intention of helping the Darkners, stating that it "might even be kind of fun, honestly" if the world is to be destroyed. Before Ralsei can change Susie's mind, Lancer busts in and knocks Ralsei away. After introducing himself to Kris and Susie, Lancer explains that he'll defeat the two of them to make sure they don't go east, their only way home.

Lancer engages the heroes in combat, and is subsequently defeated. He proclaims that, the next time the heroes meet him, they'll be the losers, before leaving the scene. Ralsei then walks back to the heroes, takes off his hood, and reveals his identity to be Ralsei the Prince. Susie declares she'll keep going by herself, and walks out of the castle, into Field.

Ralsei recommends to Kris that they follow Susie, as he guides Kris out of the castle. Just outside the town, Ralsei offers to teach Kris about encounters by having them fight a training Dummy. After Kris completes Ralsei's tutorial, the two of them move towards the "Great Door," which Ralsei seems surprised to see opened. The two of them then proceed to go through the Great Door, into Field, to give chase to Susie.

Kris and Susie enter Castle Town again at the beginning of the second chapter, this time on purpose. Immediately upon entering, Ralsei asks Kris to return back to the Light World and bring everything from the Unused Classroom back to the Castle Town. After bringing everything back, characters from Chapter 1 appear inside the Castle Town. It is then revealed that the old Dark World no longer exists, as a consequence of the Eastern Fountain being sealed. Kris and Susie then get the opportunity to interact with some of the NPCs, do some shopping and playing minigames. Ralsei then sends Kris and Susie back to the Hometown to do their homework.

After finishing their adventure in the Library Dark World, the party can find all recruited characters in Castle Town again, unlocking different dialogues, shopping options and minigames. The party may then return back to the Hometown anytime they wish.

Located to the right of the city's entrance, this area is used for Ralsei's training dummy in Chapter 1. In Chapter 2, the dummy is still there, with the Worm eating its clothes. After returning from the Cyber World, an Addison can be found here selling free sample bites of the clothes that were previously on the dummy. If Kris didn't purchase the Mannequin, it ends up beside the Ralsei dummy and wear its clothes.

Sweet Cap'n Cakes's Music Room can also be found in this area, if all enemies have been recruited in the Cyber World. In the Music Room, the party can play some tracks from the Chapter 1 and Chapter 2 OST. If they have not, Sweet Cap'n Cakes mention how they need more recruits to reopen their shop.

Mr. Elegance is also present in the area. After returning from the Cyber World, he mentions how they are rebuilding the area to be more board-like.

Going past the training area brings the party to the Great Door which lead to the Field in Chapter 1. In Chapter 2, the door seem to be permanently closed, and a Bloxer with three pairs of pants can be found there instead. He adds a fourth pair of pants by the end of Chapter 2 if enough enemies have been recruited. After returning from the Cyber World, a tiny walking car can be seen there as well if all enemies have been recruited and fewer than three cars have been hit while driving with Queen.[1][Testing required] If not all enemies were recruited, Poppup and Maus appear at the door if they were recruited instead.

The Party Dojo, run by Jigsaw Joe, allows the party to attempt various challenges, which each yield various rewards. The challenges are in the form of battles that serve as minigames.

In the dojo, a Battle's Master can tell the party more about battles. Other enemies from Chapter 1 and Chapter 2 are also present, such as Clover, Werewerewire and Bloxer.

Seam's shop from the Field has been transferred into Castle Town. They are selling their usual wares, with Dark Candy replaced by CD Bagel when Sweet Cap'n Cakes have opened their Music Shop.

Malius and Lancer can be found in the Top Bakery. Malius offers the party to fix them or fuse multiple items into one. Lancer offers the party a free Lancer Cookie, but does not give the cookie if the party already has one, complaining that he needs to regenerate.

After returning from the Cyber World, Swatch banishes the Top Chef from the cafe, so he shows up in the bakery. If the party returned his repaired Top Cake in Chapter 1, Top Chef gives the party a Spin Cake whenever they do not already have one.

The Cafe is a building where the player can interact with their party's Recruits. Four different recruits can be placed at the three tables inside, and interacting with each of them can allow the player to learn more about their personalities. Depending on the composition of their placement, the recruits' responses to Kris interacting with them varies, although they mainly share their drink or snack preferences by attempting to voice their order if they lack any dynamics between them.

The initial composition of the recruits are a Jigsawry seated at the table closest to the broken jukebox near the northwest corner, a Rudinn seated at the table across it, and another Rudinn sharing the southern table with a Hathy, respectively seated west and east of said table.

Before visiting Cyber World, Top Chef runs the Cafe—he wanted to run the Top Bakery, but someone (Malius) is already working there, so he is serving pastries from the Cafe instead. After returning from Cyber World, Swatch takes over the Cafe and banishes Top Chef to the Top Bakery. Interacting with whoever is currently manning the counter gives the player the option to check their current recruits and change which are currently placed in the available seats.

If the party returned his repaired Top Cake in Chapter 1, Top Chef gives the party a Spin Cake whenever they do not already have one.

Tasque Manager, a Tasque, and a Swatchling appear in the Cafe if they are recruited in the Cyber World, separately from the placed recruits. As a result, Tasque Manager cannot be placed at a table, although additional Tasques and Swatchlings can.

In Chapter 2, after Kris brings all objects from the unused classroom to the closet, Mr. Society can be found next to the cliffs. He mentions being unable to handle society and floats to the top of the cliff. If the party completed his blue checkmark quest in the Cyber World, the Hacker can be found here as well, mentioning how the Castle Town is nearly as good as the city he made in Minecrap.

In Chapter 2, if the save file was not continued from a Chapter 1 save file in which Jevil was defeated, but Jevil has been defeated in any Chapter 1 save file, Jevil's Shadow Crystal and either the Jevilstail or Devilsknife can be found in a hole in the side of the cliff once Castle Town has been transformed into My Castle Town. These items can be found before visiting the Cyber World; after visiting Cyber World, it is only possible to retrieve the Shadow Crystal here if Spamton NEO was defeated.

After returning from the Cyber World, Trashy can be found here. If all Darkners were recruited in the Cyber World, Nubert can also be seen here, with his blond wig now belonging to the Little Ball.

The second floor, also known as "Living Quarters," is where Kris's, Susie's, and Lancer's rooms are located, as well as a closed down staircase to the third floor, where Ralsei's room is found, but still under construction during the events of Chapter 2. After returning from the Cyber World, the Queen can be found here too, planning her new room on the third floor. If all Darkners were recruited in the Cyber World, Lancer and the Queen can be found lying on loungers here, with a Rudinn as their fan, similarly to how Susie and Lancer did in the Forest.

Kris's room contains a bed, a stand for their Manual, a shelf and a wardrobe full of clothes. If the Manual was thrown away in Chapter 1, the stand for the Manual is replaced with a trash can. If collected from Noelle's room in the Queen's Mansion, an ICE-E statue also appears here. If Kris has eaten the moss in Chapter 1, some decorative moss appears in the bottom right corner of the room. Susie's room contains a spiked bed, a refrigerator, another stand for her Manual, and another wardrobe. If collected from Noelle's room in the Mansion, a statue of a monster similar to the one seen in The Prophecy can be seen here. Lancer's room looks exactly the same as in Card Castle, but without his bike in the bed.

The basement, or "Living Quarters for Bad Guys," contains two cages with three former kings and circus animals, and one large jail cell containing the King, whose cage resembles that of a giant hamster cage. C. Round is shown to be the protector of this room. 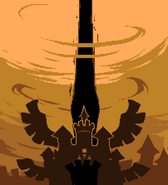 Castle Town's castle as shown in The Prophecy