The Annoying Dog is a small white dog, looking similar to the miniature eskimo breed. He often sports a smiling face.

When Kris looks through the window of the Library's Computer Lab, they can see the Annoying Dog working on a game. The narration states, "(Seems like when the game's finished, you can go in...) (You just have to trust the dog...)" If Kris peers through the window a second time, the dog is "playing the maracas" and not doing any work.

Undyne informs Kris that a "little dog" in a toy car appeared while she was directing traffic. With the car, the dog did "donuts" in the middle of the street. This caused assorted cars to be piled around the Library, blocking the road. If Kris interacts with Scared Donut Guy, he explains his disappointment. He had "sped over" when he heard a dog was doing "donuts," expecting food, not a "special attack for cars."

In Cyber City, when Kris is in the west alley of the road with yellow cars, there are yellow signs of a dog. If Kris passes the signs, they are transported alone to a path that leads east. Further down the path, the Annoying Dog appears in a toy car and rams into Kris's SOUL, depleting their HP. When they are downed, the Undertale Game Over screen appears. The Annoying Dog immediately drives into the words with the toy car and squishes them. Afterwards, Kris respawns at the Dog Dumpster with a Dog Dollar in their inventory. The dumpster also has a pillow for the dog to sleep on. [1]

As Kris drives Queen and Noelle in a car, they had to stop due to a traffic jam. Queen comments that "A Dog Must Have Wandered In The Road Again."

In Queen's Mansion, Queen hid a key under one of 48 platters in the dining hall. Kris notices a moving platter with small white limbs underneath it. Upon interaction, Kris, Susie, and Ralsei surround the table. The Annoying Dog reacts with surprise and backs away, and the platter falls off. After Susie attempts to threaten the dog, he runs across the room with the party atop the table. Once the key is found, the Annoying Dog breaks it, then charges and explodes the locked door. The dog charges through the hallway with the party atop the table until he hits a wall. The party jumps off, and the Annoying Dog flees to the right.

Altering save file data to certain inaccessible or nonexistent rooms (such as room 5), like in Undertale, can result in the Annoying Dog appearing upon game launch, and the game title changing to "DOGTARUNE." This is referred to as a "Dogcheck," named by the internal procedure for checking for that illogical state. If a dogcheck is triggered in Chapter 1, the dog is just seen sleeping. In Chapter 2, however, he drives his car across the screen and occasionally more (smaller) cars at varying speeds also appear (driven by smaller Annoying Dogs).

These screens can also be brought up by loading a save file made in the 2021 version of the game through the SURVEY_PROGRAM version.

Sleeping dog on the Stats screen. 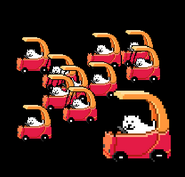 Dogcheck in Chapter 2, with many smaller Annoying Dogs on the screen.